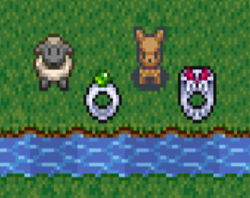 Two new steel accessories are available to craft or discover in treasure chests. These valuable equips are special in that they come with 2 random +5 skill bonuses built in. There is also rare chance for them to be generated with a single +10 bonus.

Pet dogs who are told to ‘stay’ and in good health will now attack nearby hostile mobs or infamous players. Unless you feed them occasionally dogs will slowly lose loyalty as the days pass. When a dog becomes wild again it will no longer spontaneously explode (die of old age). Dogs can be trained to be about twice as strong as before!

Some of you may have noticed the ‘Play as Guest’ feature was implemented, and there is also a new wool generation system. Sheep who are well fed will produce wool more rapidly over time. The structure decay rate has also been reduced slightly. The /ignore command now works on tribe chat and local chat.

I have spent most of my time working on bugs and taking care of some things outside of the game. A number of crash bugs were fixed, though I’m still tracking down a couple more. I still have a pretty long to-do list so keep on testing, thanks for your patience!