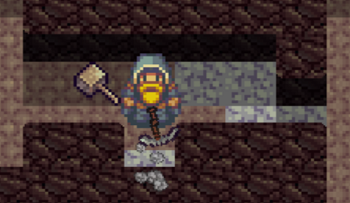 It’s been pretty busy around here, but despite the new baby and my computer falling apart I was able to put together a few nice changes. In addition to a number of visual updates and quality of life changes, there is a new item which will let you repeat your last craft or build command and a peaceful mob that likes to mine in the underworld. The new item can’t be crafted so you’ll have to find it in treasure chests (or maybe the new mob drops it..). Read on for more changes.

Mythic Builder: Will automatically craft or build the last thing you made as long as you have the resources for it (doesn’t apply to knitting). This can be used to quickly place a line of walls, or since it works with the auto-swing feature, save your hand from breaking from too many button presses during a big crafting session. Has limited uses like a bandage so stock up if you can.

Arcadian Miner: Wont attack first, just likes to walk around and mine the walls. If you do decide to disturb him he wont be too difficult, but he does have a strong self heal if he feels threatened. Has also been known to get angry and destroy repair kits.

Another change to be aware of is that now whenever a tower receives decay damage one of its arrows will decay as well. This wont happen too frequently thanks to the change that limits decay hits over time, but it will create a bit more maintenance for huge tower lines and give raiders a slight boost against stagnant bases.

I’m still working on some new exciting features and will continue making changes in the background so please report any issues you find. I’m also still investigating some reports with network stability so let me know if you have any helpful information regarding that. As always thanks so much for your support. Have fun!