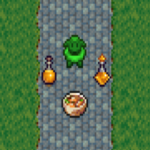 Hope you’ve been saving your poison extracts! This update implements most of the missing features for poison. You can now use poison as an ingredient in food dishes, and apply it to most bladed weapons. Healing potions have also received a boost, mainly for users with high hitpoints. As usual a number of bugs were fixed over the last month. Read on for more changes:

Kills for food poisoning will be credited to the dish, so the killer will be unknown and gain no infamy (there are some protections for newbies though). If someone or something is killed by a poisoned weapon then the killer will take credit if they were recently in combat with the victim, otherwise the kill will be credited to the weapon. Bosses are currently immune to poisons. Here are some more changes in this patch:

I wasn’t able to finish up the client changes I’ve been working on this patch which would enable some new features and graphics (for decorations and such). I’ll keep working on that along with some other todo list items I’m excited to add. In other news we are expecting our third baby next month, just in case patch releases become irregular you’ll know why 🙂

Please test everything out and let us know if you find any bugs so I can squash them – thanks for your support and have fun!