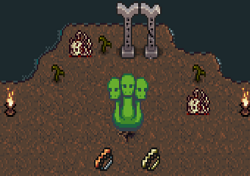 Added a new boss to the snake pit! This is a medium level boss that can be beaten by lower level players with the right strategy, though it can be very difficult for any level if you don’t bring enough friends or healing items.

Added 2 new knuckle weapons which use the ‘unarmed’ skill. These have low damage and durability but attack faster than anything else. They’re two handed and will work on training dummies, but wont apply the knockback effect from being barehanded.

Two handed weapons can now spawn with double the runes (up to rune level 10). This should lead to more diverse combat builds. Remember that better runes are more likely in lower underworld levels. When the new combination altar is finished then it will be easier to max out your equipment.

Dash distance is now slightly reduced if you have taken recent player damage. It can also be reduced if you are slowed, based on the severity of the slow.

You can no longer rapidly transition to another map zone more than twice without having to wait a few seconds. Does not apply to stairs or warps.

Your ignore list now works for blocking tribe invites. Invites now specify the person inviting you, and tribe invites will no longer send to people who are already in a tribe.

Fixed the issue where ice elementals and some other mobs would fail to respond if attacked at max range.

Fixed bugs with Chaos where they would freeze when trying to pick up an item, were unable to pick up an item directly under them, or would ignore a nearby item to favor one out of their reach. They will also occasionally attack things around them even without a weapon, including low level players.

Fixed several bugs related to the website and email system, and a rare server crash bug. Also fixed a rare login bug where walls would appear to be missing and sometimes cause inventory issues.

More bosses and abilities will be coming, and eventually each boss may be associated with a different ability book. The new altar, and a new castle area (white map) are being worked on among other things, so look forward to that. Have fun, report any bugs you find, and don’t breathe the toxic gas!