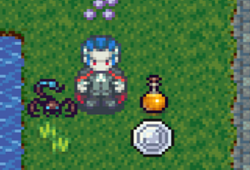 This patch adds a couple new medium level mobs, a unique off-hand equip, a new tribe gate feature, and a few balance changes. These new changes are being tested to improve weapon viability.

New mob: Vampire. Spawns as male or female (or sometimes as a bat). Ignores shield block, and does high damage if you are healthy but loses interest if you become unhealthy. Heals itself from the damage it does.

New mob: Scorpion. This critter introduces the new poison mechanics. Poison will drain some hp over time and there is currently no antidote except for healing and waiting it out. This particular enemy has a 20% chance to poison you for a minute. You can also collect poison extract yourself (though you can’t apply it just yet!).

New item: Steel Targe. This lightweight equip wont block like a traditional shield, but has no attack speed penalty either. So you can attack full speed and have more total rune and gem bonuses. It’s not currently craftable but can be found as rare treasure.

New tribe gate feature: If you are an elder or leader you can use /allow on a tribe gate to toggle whether it is locked to recruits. The default behavior is to allow recruits. Use this to section off areas of your base from new tribemates you don’t fully trust yet.

The Glowing rune now gives 3% armor penetration per level, rather than 2%.

Clubbing weapons now have a natural 60% armor penetration bonus, down from 85%.

Whirlwind hits no longer apply the base armor penetration from clubs or hammers, but will still respect glowing runes.

Random variance for damage has been capped at 10 more or 10 less than your fixed damage. So you wont see wildly different numbers when you get a critical hit.

Weapon skill levels now give 0.5 precision per level rather than 1.0 per level.

As usual all these changes may be adjusted in a future patch. Also remember to report any new bugs you find – I’ve been regularly giving out diamonds as a reward 🙂 More fun stuff to come. Thanks for testing!