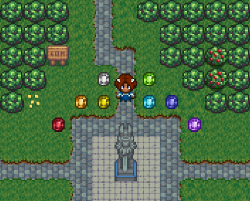 Mystera’s first safe town is finally here for testing. This new town is for casual players, or new players who want a safe place to learn the game until they transition to Galebrook. It also functions as a refuge for people who are being hunted. It’s not an ideal place for high level players though as there are some different mechanics which I’ll explain below.

I want to explain the new gem experience mechanic first: When you have equipment that comes with skills bonuses (for instance a Journeyman’s ring gives +6 exploration) you not only get the bonus levels for that skill but now you also gain a bit of bonus experience! For every bonus level you will get +5% experience for that specific skill. This applies to custom equipment too of course so you can craft items that will help you level faster in the skill of your choice. Everything stacks between all your equipment slots, so two Peddler’s Gems will give you an instant +60% to mining and chopping experience. This means if you max out all your equipment with gems for one specific skill you can gain up to 250% bonus experience for it. This new mechanic makes gems more valuable and fun, and can save you a lot of time when grinding a particularly difficult skill.

Hammers had to be adjusted as a result of this change because they gave large amounts of bonus destruction. Now their gem bonus has been removed and they get an equivalent building damage bonus instead. This is a buff to hammers since their damage is not limited by skill level restrictions any longer. Not to mention you can smith destruction onto them now.

Now for the details on Wellington mechanics. This is a green map so there is no pvp (unless they are infamous) and there is no building destruction for structures that decay. Most actions affecting the town have a myst cost.

Building a structure has a cost, and even repairing it has a (much smaller) cost. The myst required is based off of several factors, mostly the power of your character and your ability to acquire myst. It may only cost about 20 myst for a new character to build a wall but it could be thousands for a veteran player. Either way since myst is not transferable it will take some time and effort to build up Wellington as a town. You can use the /mystcost command to see your base cost for one structure. It will also cost some smaller amounts of myst to channel water, place roads/floors, dig up roads, and destroy signs.

Fishing works the same as in Galebrook with a sweet spot. Animals breed and behave the same, along with crops. Towers will not open fire on peaceful citizens.

Also while inside the town of Wellington your experience gain is reduced by 20% and your skill experience is capped to level 80. The water levels are managed automatically and the flora and fauna will be slightly different from Galebrook. It’s mostly a big grassy field with some lakes and less resources than other areas. Plenty of room for people to live in peace.

During testing various costs and mechanics may change without notice. I’m waiting on some other interesting features for when everything is balanced. On that note, although griefing is much harder in this town, it will be monitored for some time. Admins may intervene occasionally and citizens of Wellington may even be given extra tools to combat trolls if necessary.

I have reduced decay slightly in all of Mystera. Additionally super decay wont affect new structures for a few hours. I decided to delay the other new maps until next patch so look forward to that soon. Go have fun testing and report any issues through the contact form. Thanks 🙂