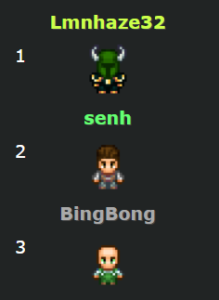 Thanks to those who competed in this seasonal event! The top 3 players and diamond winners are: Lmnhaze32, senh, and BingBong. That server has now been migrated and transformed into the new SEA server. This is a permanent server, so enjoy the open land while it lasts! There has also been a few changes and bug fixes over the last week:

I’m also testing out a new host for the Brazil server as of yesterday. If it doesn’t perform well enough after a few days I will move it again. A couple bigger patches are on the way with new items and game mechanics that will be nice for both newbies and higher level players.